Free copy for review.
I'm 15 and I found it perfect for my age though I do read books that are usually recommended for people slightly older than me.
I immediately feel in love with Adri from the beginning and the way she introduced herself to Jon was fabulous. I did find that this book would have been so little more understandable if I had read the first book in the series (this is the second one) but all the same I did enjoy it a great deal.
I found the imagery in this book fabulous. While reading this I almost felt like I was in Hawaii and when ever Adri went into the sea I got this spark down my spine because I adore swimming in the sea. I also found that the discovery of the body gave me a chill that made me feel exactly how Adri would have felt.
At the beginning of each chapter there was a little recipe for different things that came up in that chapter. ( I can't wait to try and make that "Pineapple Upside Down Cake" on chapter 14)
The ending is fabulous and completely unexpected!!
This was an amazing book over all and I can't wait to read the first one! :)

The Lion, The Witch and The Wardrobe - Book vs Film

I read The Lion, The Witch and The Wardrobe this morning and it got me thinking about it and the film (Disney version).
This will contain spoilers for both the film and the book. If you haven't read/slashed watch yet, they are... OMG!!!
*
*
*
*
*
*
Carrying on... I personally prefer the book. In the film, there is a scene which is filmed in a rocky gorge type thing, here Peter is leading the fight but they are losing people left, right and centre and then they leave - losing half there army. You know they also do this in the 'Prince Caspian'. Neither of these scenes can be found in the book.
It drives me crazy when they cut out good scenes for book to film. But I find it 100% worse than crazy when they ADD extra scenes!! I personally think it's pointless. I hate that they've made it soo much more violent. Not cool!
*
*
*
But they are both amazing!
The book I give 5/5
The film I give 4/5
❤❤ x
Goodreads Account.

"Using only Elizabeth's words (adapted from her letters, speeches and other writings), Rebecca Vaughan (Austen's Woman, Female Gothic), continues her successful collaboration with director Guy Masterson (Oliver Award Winning Morecambe), exploring the queen's struggle to reconcile the desires of womanhood with the duties of sovereignty."
- A Dyad Production

As a fifteen year old who isn't used to any language but modern English, I found that incredibly hard to understand, especially with it being 1hr15 long, it felt it dragged a bit. But with the way this whole performance was set up, despite not being able to understand a lot of it you could really get a feel for what was going on. Using Clamps (see below *) I had some thoughts.

These six things made the play a wonder to watch even though I understood a whole of about ten words. I would just like to say, it's not that I couldn't hear her it simply was that I can't understand Elizabethan.
Over all really enjoyed and I seriously would go and see it again!
x 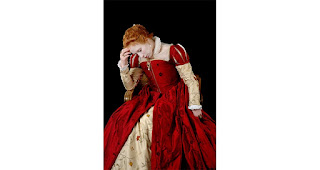 *I'm going to use a thing that I learnt about in Media called 'Mise-en-scène'. In that there is costume, lighting, actors, make-up, props and scenery. Or CLAMPS

We live in a world where occasionally we imagine something else to make us feel better or live in a day forgetting an important event.
I do this most days!
I have had some pretty terrible tragedies in my time (it is only 15 years but still). I have lost people like you can't imagine and I have defiantly not coped well. But to anyone I know, I ask you: "Did you notice?"
My illusion includes no money troubles. No lost family. A cat that actually likes me and a house I've fallen in love with. Only in my head though. But if you asked me: "Where do you live?" I wouldn't lie. I just may not tell you the complete truth. Just the bits I actually like.
We all I think live in our little illusions occasionally.
x